High-end entertainment on the high seas

SALZBRENNER media equips Iona, one of the largest and most modern cruise ships in the world, with comprehensive multimedia solutions in a class of their own.

For the team of experts at full-service provider SALZBRENNER media, planning and implementing an extensive entertainment infrastructure within a sprawling, interconnected building complex is routine. Equipping one of the world’s largest and most modern cruise ships with top-class multimedia solutions, on the other hand, was a special project with organizational, technical and logistical superlatives. .

Named after the picturesque island of Iona in the middle of the Scottish Hebrides, the cruise ship is currently not only one of the largest, but also one of the most modern of its kind. The Excel-class ship, which is equipped with an innovative liquefied natural gas propulsion system, was built by the MEYER WERFT shipyard. The latest addition to the P&O Cruises fleet offers accommodation for a total of over 5,000 passengers. This obviously requires provision of an extensive infrastructure, including sophisticated lighting, sound and video installations

In accordance with the contract awarded by MEYER WERFT, the project included equipping a total of 35 public areas of the ship, including theatres, four cinemas, pubs & bars, restaurants, the fitness centre, spa and crew areas. Given an installation phase envisaged to take less than 12 months, this required meticulous planning and preparation in order to ensure the ultimate smooth commissioning of almost 20,000 individual units at the desired time. In order to cope with the mammoth project, it also became necessary to establish a new SALZBRENNER media branch office in the immediate vicinity of the shipyard.

“One of the biggest challenges of the project was getting the installations done in all areas of the ship at the same time and the art of having tens of thousands of components in the right place at the right time”, said Andreas Singer, Project Manager at SALZBRENNER media.

Based on their own in-house metal manufacturing facility as well as outstanding expertise in the development and production of, for example, highly specialised circuit boards, according to customer requirements, exclusive customised products of all kinds are part of SALZBRENNER media’s permanent portfolio. In this context, the service provider implemented seat allocation systems for a total of four cinemas as well as special working light control systems and self-developed mechanical mounting solutions for display walls, lasers and subwoofers with regard to the client’s individual requirements and specifications. In addition to junction boxes and the installation of control cabinets comprising more than 120 hand-assembled racks, Iona’s equipment also included the design of an audio muting module for guitar amplifiers, an HDMI-based audio mute unit for game consoles and DMX-based mains switching modules. Specially designed working light controls, signal lights and traffic light systems were also installed as essential comfort and safety features of the infrastructure. The defining architectural signature of the cruise ship is also reflected in beautifully integrated light strip elements, which perfectly underscore the ambience with their excellent colour coordination. 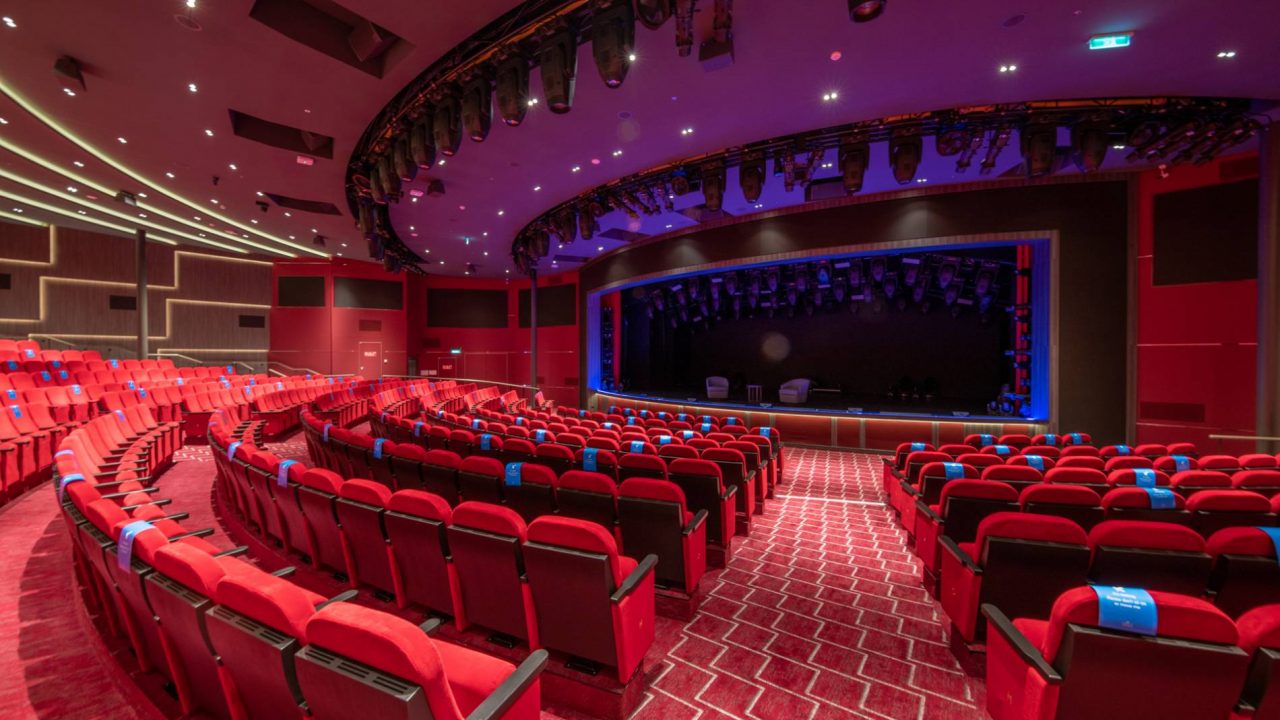 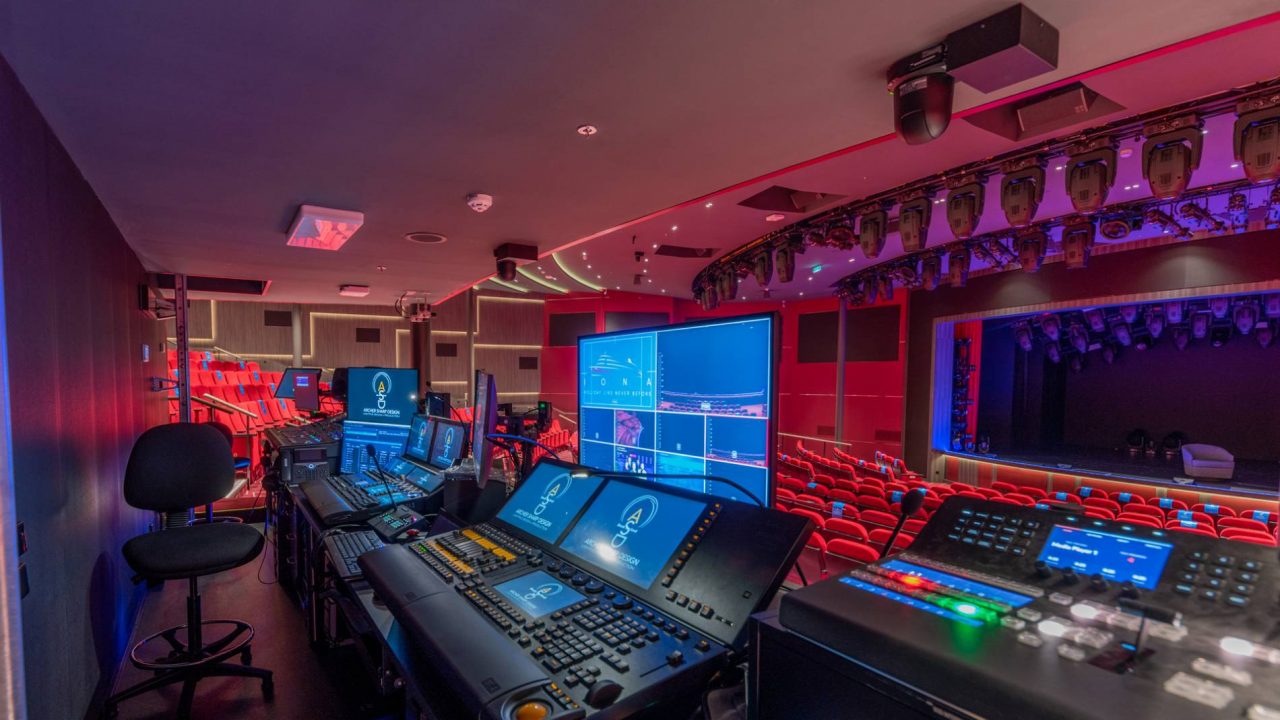 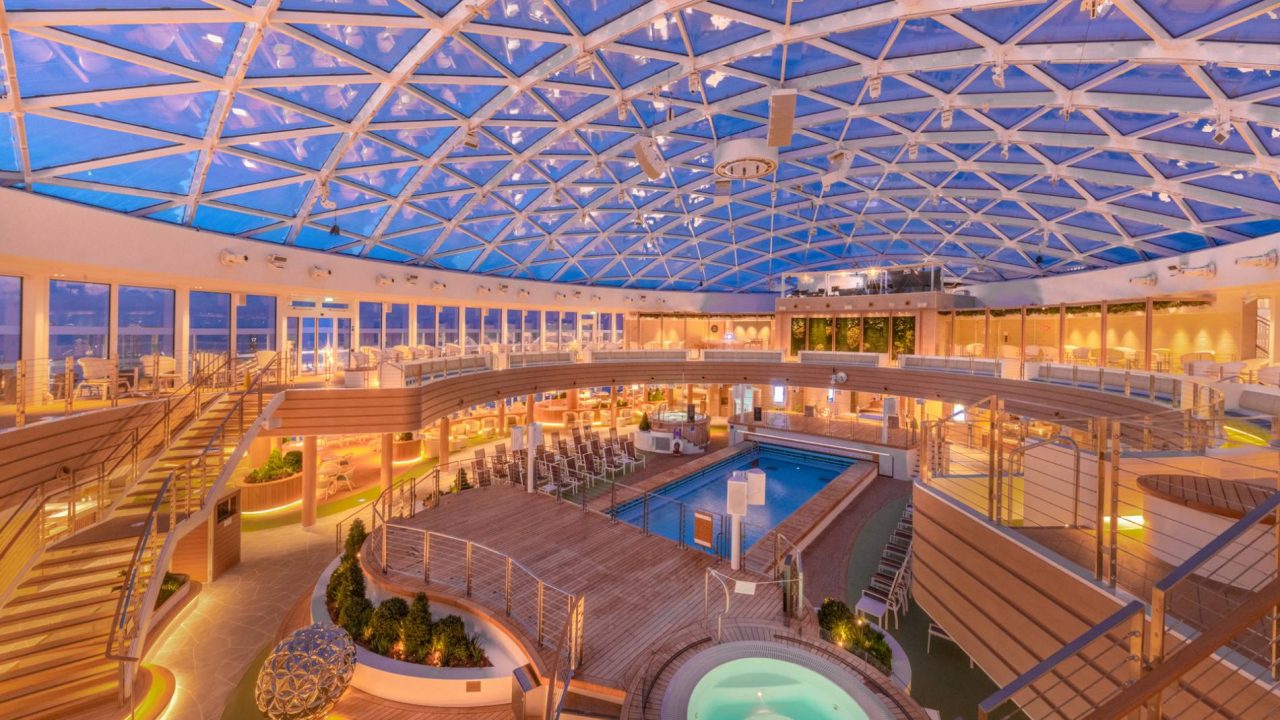 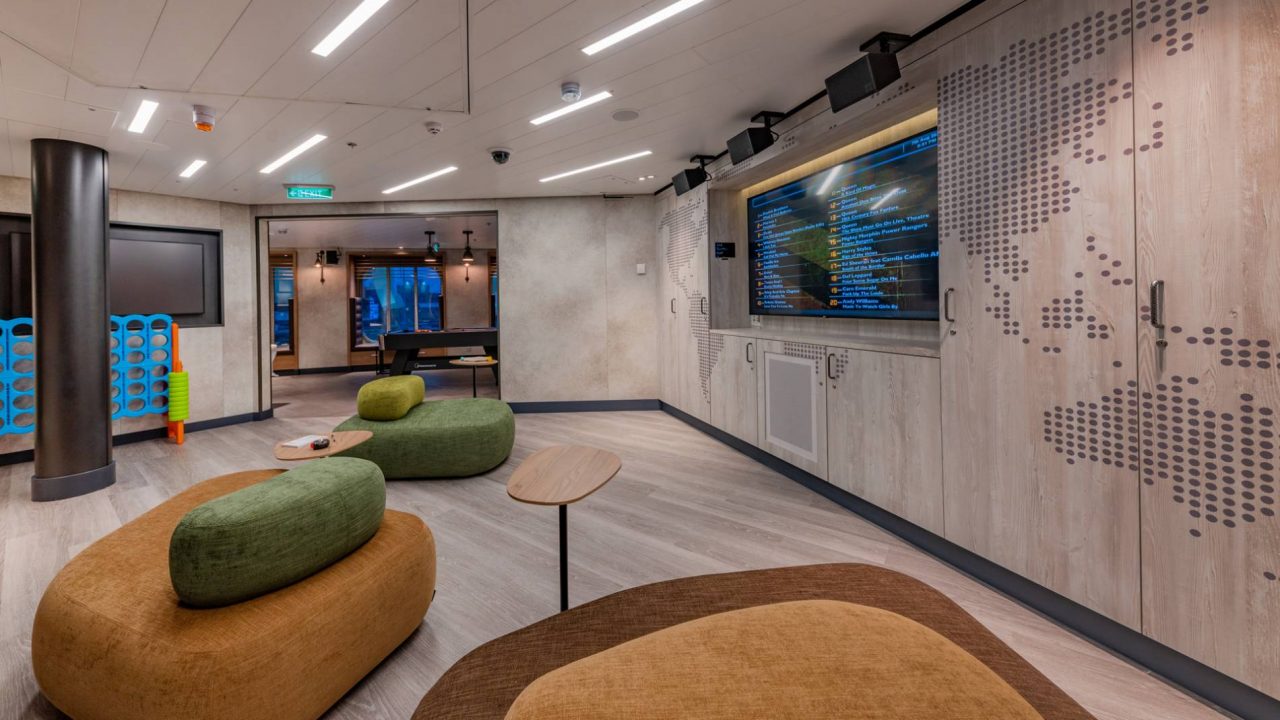 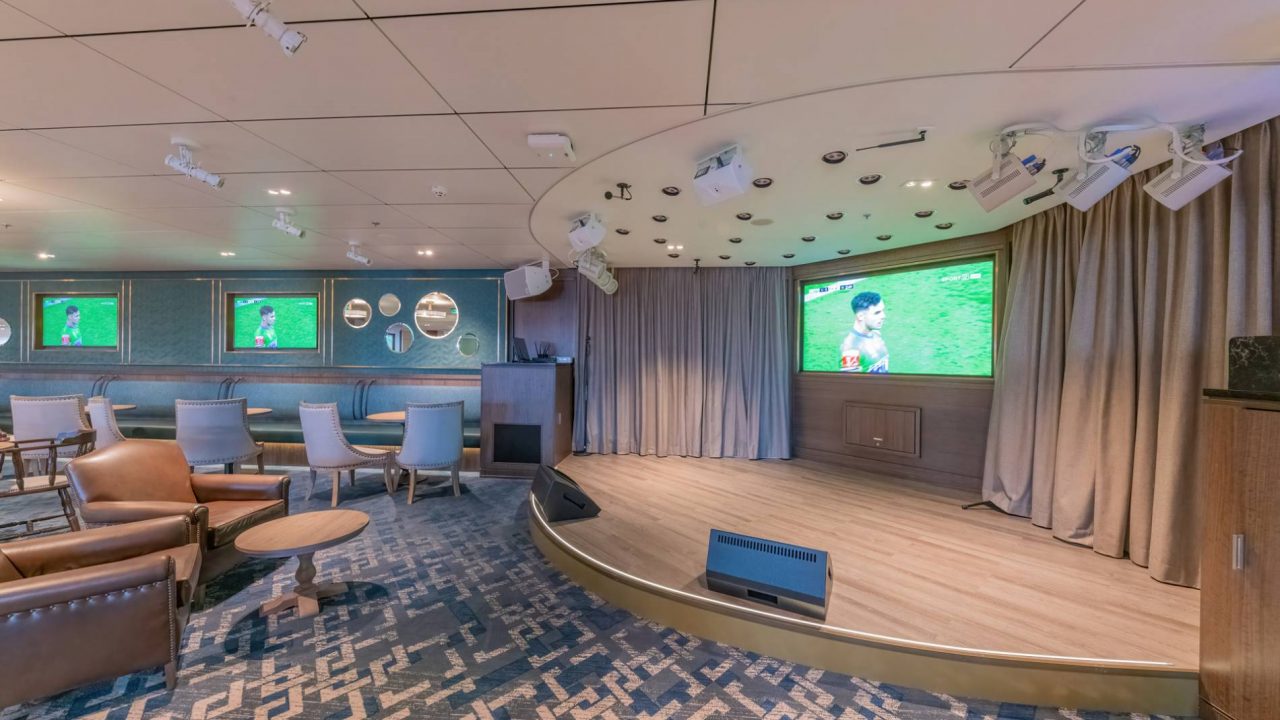 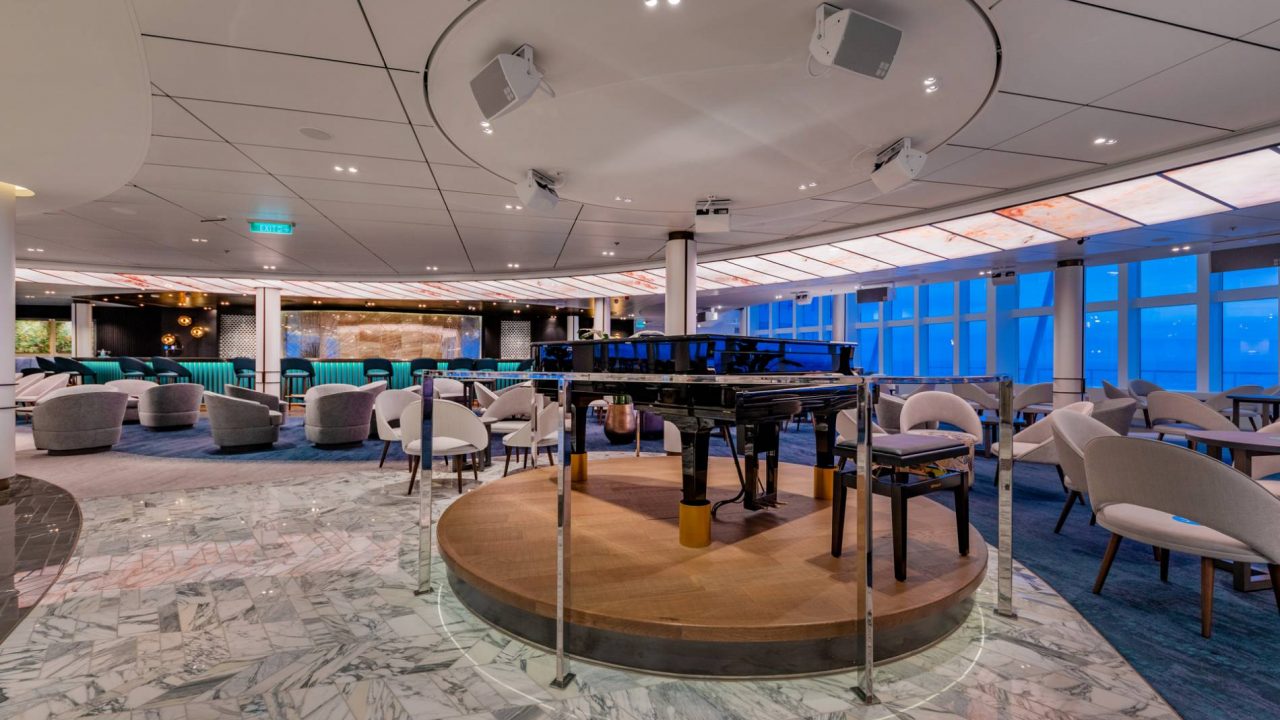 LIGHTS AND LASER UNDER THE STARS

The absolute highlight of Iona is the SkyDome, which extends over three decks and is unique in its design with its huge glass dome. Thanks to the implementation and installation of a perfectly coordinated event technology concept, it is probably one of the most exclusive and extraordinary floating event locations in the world. The dome roof was fitted with the staggering number of 280 custom-built show spotlights from SGM, each measuring a full metre in length. The installation is crowned by a 300-kilogram laser fully two-metres in diameter from ER Productions, which was fixed at a height of eight metres with extraordinary effort. Another real eye-catcher on board is a transparent multimedia display wall consisting of ten individual 49″ displays, where four panels can even be converted into elegantly swivelling door elements. Showlight systems by Robe are part of the highly elaborate lighting concept. Installed in almost all event areas, with their scanners, moving heads and LED spotlights, they maintain a common atmospheric theme throughout the individual theatres, clubs and live locations. In addition, the ship’s interior was enriched with a total of almost 125 square metres of high-quality mounted LED walls by Absen, some of which are mobile, and a total of 720 circuits reserved exclusively for lighting technology.

SOUND IN A CLASS OF ITS OWN

From the line array inside the dome to the theatre and cinema sound systems, around 600 PA loudspeakers from d&b and 10 state-of-the-art audio mixing consoles from DiGiCo ensure excellent sound in every last corner of the ship. On the visual side, which goes hand-in-hand, they are supported by grandMA series lighting consoles from the manufacturer MA. For the ship-wide distribution of audio and video content, SALZBRENNER media installed an extensive entertainment network which connects all areas of Iona to the overall system, from cinemas, spa and pool areas to bars and pubs. et.

Tech update for the Festspielhaus Baden-Baden